I absolutely love reading an anthology. There are almost always authors I have never read or heard of before and I really enjoy the snapshot into their writings. I have found some great authors doing this James Enge comes to mind. I have also found that I don't like some of the authors stuff once I read it, Michael Moorcock's Elric in the anthology was great, the books were kinda boring.

This anthology is weird. It is isn't set about with a theme like Dangerous Women it is a collection of Urban Fantasy with three subsections. Each subsection has an introduction explaining the origins and the subgenre.

The Mythic Fiction section was awesome, these is where most of my favourite stories come from. The introduction was written by Charles De Lint. He informs the reader that the conscious use of myth, medieval romance, folklore, and/or fairytales but are set in the real world, rather than in invented fantasy landscapes is a defining feature of Mythic fiction.

A Bird That Whistles by Emma Bull. A guy meets a faire musician and learns a fair few things. What I loved about this story was how music and human emotion was so central to the story and how the faire reacted to this.

Julie's Unicorn by Peter S. Beagle. Julie has a unicorn in her tiny house. This story was so beautiful and made me think about art in a different way after reading it.

The Paranormal romance section was way better than I expected because the stories were really good. The romance aspect is just normal romance, not romance that doesn't make any sense because of crappy writing or sexed up human and vampire kinkiness.  The people in these stories have a connection to a zombie, a werewolf, a faire but so what? These are relationships exist because there is a world in which humans and the supernatural co-exist. The main focus is not the romance, or the relationship, it just includes romance and a relationship.

Seeing Eye by Patricia Briggs. Kick arse blind witch helps out a werewolf whose brother has been kidnaped. Excellent characterisation in such a small story.

Boobs by Suzy Mckee Charnas: Teenage girl finds out she turns into a werewolf during the full moon. Awesome story about growing up with fantastical elements.

The Noir Fantasy section is heavily influenced by horror I wasn't such a fan, I found some of the stories to be super creepy and I think that was the intention, so well done to them! In the introduction for the section Joe R. Lansdale writes, "The fiction has an urban stink about it. The terror is often due to the actions of people: pollutions, street crime, over population, dehumanisation, and so on. What supernatural elements there are, are dragged out of the haunted houses, and int the tract house and walk up apartment or they lace place in the wasteland of some horrid aftermath brought on by the mistakes of civilisation". This is a perfect introduction to the stories and is so true, it was part of what freaked me out about it, so if this is what you might like, you will definitely appreciate this section more than I did.

The Coldest girl in Coldtown by Holly Black. A more realistic story of a vampire outbreak. Great plot line and interesting premise.

Talking Back to the Moon by Steven R. Boyett. A modern day werewolf finds a human alpha. This is the most disturbing story for a few reasons, excellent use of build up and suspense.

4 out of 5 kickarse sort stories 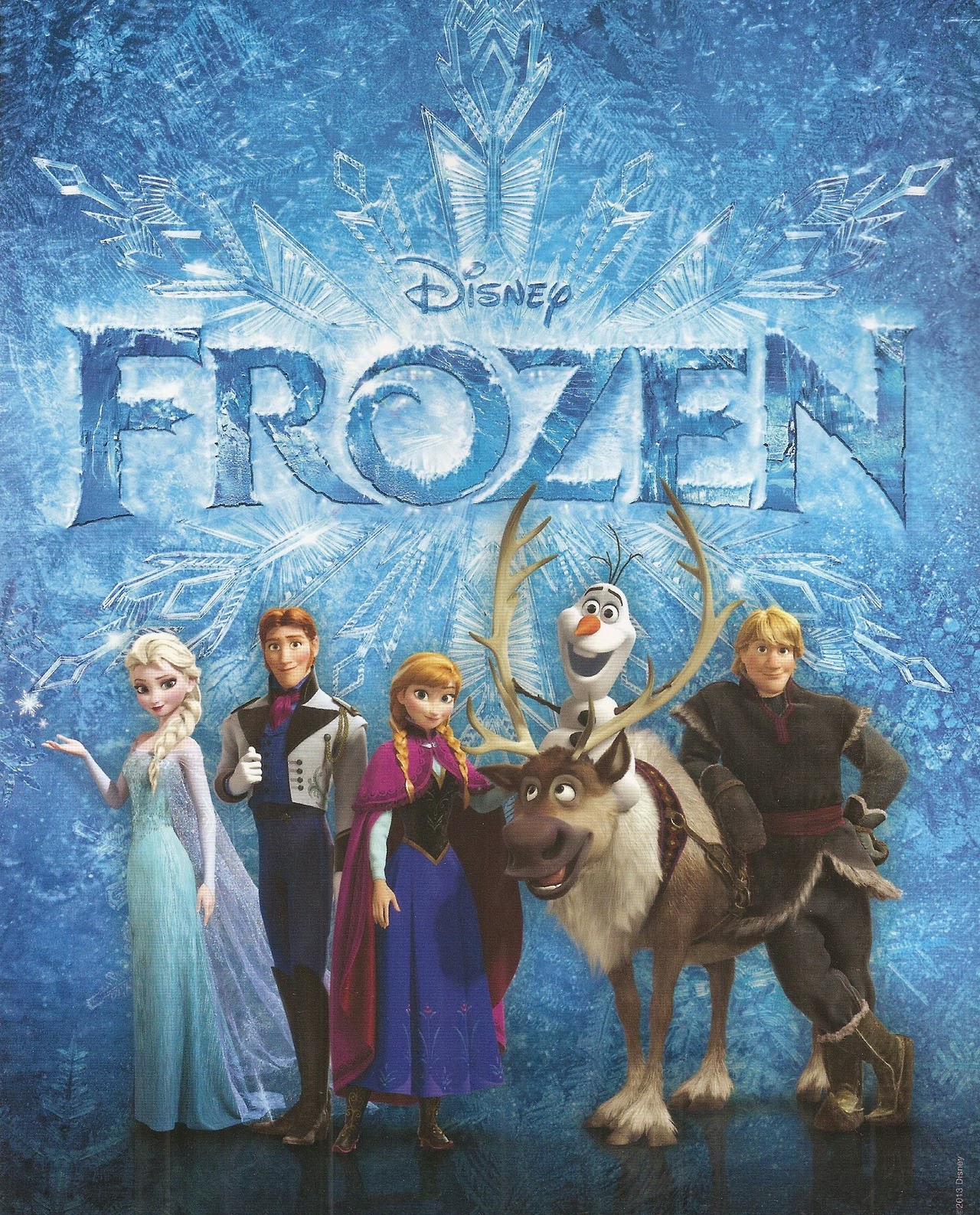 I watched Frozen the other night, I want to let you all know it is great!

1. It passes the Bechdel Test. The two main characters are female and have so much more going on then finding husbands.

2. It starts off predictable but the constant berating "Only one day!" after the princess tells her new friend she is engaged picked up my expectations. It a great lesson to be smart about your relationships, a nice teaching moment ... or at least not the same old instilling of unrealistic expectations. The act of 'true love' was totally awesome! Definitely appreciated the twist!

3. The story focuses on the sisters, their sibling relationship and the conflict that arises from their personal lives.

4. The humour is great, plenty for adults and children alike!

I recommend this as a movie to show your daughters, I would have loved to watch this with my sister when I was little!

This is a really beautiful book, the story is engaging, the descriptions are vivid and setting is uniquely imaginative.

Readers two main characters as they grow older with the knowledge they will be used as playing pieces in a content that has spanned generations. They don't know it yet, but this contest has more dangers then they could have ever imagined when pondering the vague answers given by their magic using mentors.

The concept of a circus that randomly appears, only opens at night and as it makes its way around the globe adds more and more magical displays is so interesting. I really enjoyed the diversion from the main characters to the point of view of people that attended the circus, it allowed the reader to have more insight from a very different perspective. I also really enjoyed the build up to the beginning of the contest, the conception of the circus and the preparation was riveting and didn't direct from the mystery sounding the circus at all.

It must be mentioned that the setting is the focus, and the characters where the backdrop. This is obvious though as I found the supporting characters were inconstant in quality. I felt the book did drag in parts, I felt like there was a fair bit of extraneous information that didn't add the the mystery and magical atmosphere of the circus. This is the only thing that let me down about the book. That being said I read it over two days so it clearly didn't bother me that much.

A fellow forum user over at BFB suggested picking up a hard copy instead of an Ebook. I was curious and borrowed it from my library, as it turns out I will also recommend reading it in hard copy. the attention to detail is refreshing. There are pages that divide parts of the books that look like open circus tents.

I recommend this book to those who want to delve into a world of magic, mystery and who adore the circus.

Geraldine Brooks - People of the Book.

This is an intriguing book. It has three accolades on the front and I think it deserves maybe one or two of them :P

The story follows Hanna, a book conservationist, after she receives an offer to good to resist. Hanna is given the opportunity to conserve an incredibly important, very old Jewish prayer book. While Hanna is working hard to ensure the book will be viewed and appreciated for many years to come she finds different objects within the pages, and wonders at the history of the book.

After the first few chapters form Hanna's perspective the book delves into the lives of the 'People of the Book'. The owner of the hair, the reason there is blood mixed with Kosher wine on a page and so on. These chapters are breathtakingly beautiful, and each are unique as they span hundreds of years. It is a fantastic stylistic feature and a great way to develop the story of the people who held the prayer book at one time or another.

The worlds Brooks creates are vibrant and diverse, chapters include some of the most turbulent time in history and the characters are richly developed. It was a story that you fully want to immerse yourself in and I really did. The religious history is one sided and it doesn't portray Christianity in the most positive light. I am more interested in the history and theology of religion, rather than the practice of it, so I wasn't bothered.

I will warn you the best part of the book are the chapters where the readers are inited into the lives of the 'people of the book'. The worst part of the book is the way Hanna does not feel realistic at all, her relationships seems to exist to connect to the everyman/women. Her personal conflict is unrealistic and feels forced. Definitely disappointing considering how many accolades it has received.

Email ThisBlogThis!Share to TwitterShare to FacebookShare to Pinterest
Labels: book of the year, Geraldine Brooks, international bestseller, People of the Book

The way I rank books

I also gives ratings not in stars but in aspects from the book ... so look out for that!
Posted by Wobblet at 00:14 No comments:

I used to blog over here but now I have a new home. Here are a few things you should know about me ...

1. Fantasy is what I usually eat for breakfast but I am going to a new book club that reads what I consider 'normal adult' books to meet new friends and expand my reading horizons.
2. I love pretty much everything I read but if I don't like it, I won't continue to read it.
3. I am Queen of the boards (I made my own name up :P) over here. I post random things on their blog and run the monthly book club.
4. I plan to read more YA stories to help open students (I'm a teacher) to the wonderful world of reading.

So that is a little bit about me. Hope I help you to find some great books as other have helped me!
Posted by Wobblet at 19:28 No comments: